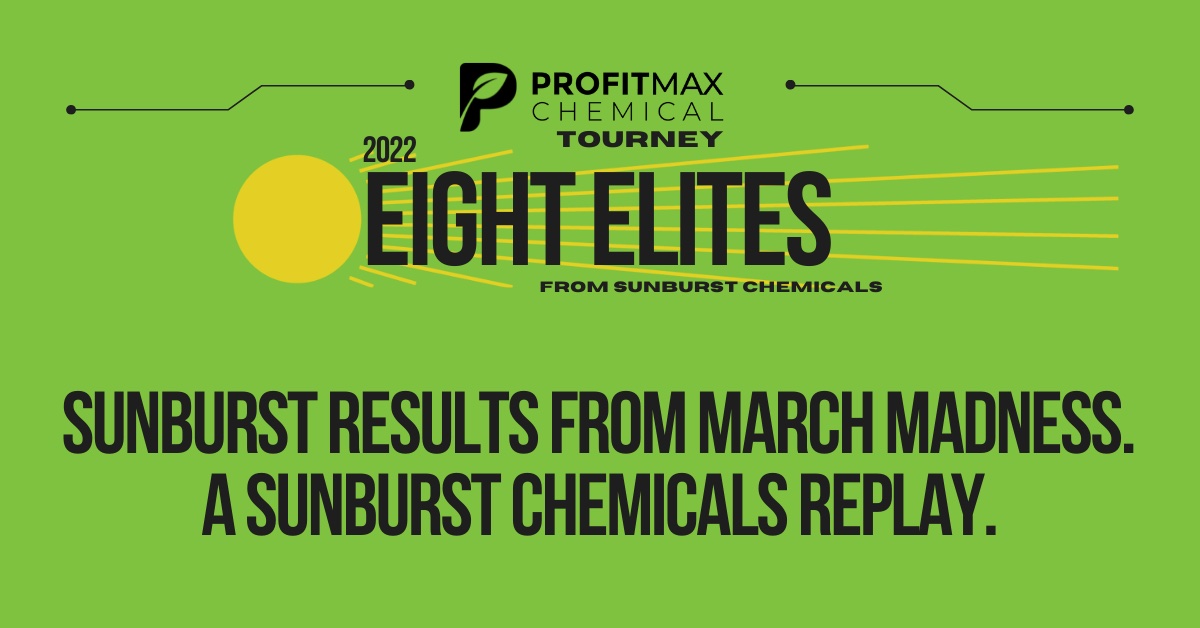 Sunburst Results from March Madness. A Sunburst Chemicals replay. A ProfitMax Chemical Replay Featured Spotlight on the sweet 16 to eight elites games and down to the championship from the Sunburst Chemical Products in March. All puns and effort at humor… intended. 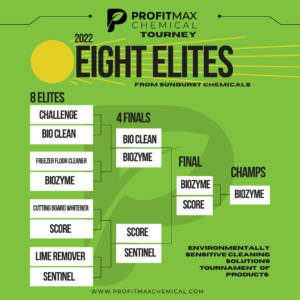 Down to the Sunburst Chemicals sweet sixteen and in this round we get to see the merely useful culled in favor of the highly effective.

In one of the more contentious competitions Bio Clean and Delite tore it up, but Delite was just too light to hang in there. Bio Clean scoured the opposing offense from the court and went on to the next round.
Attack and Challenge faced off in one of the nastier games of the night. While Attack led for most of the game with a more intense performance, their caustic attitude got them fouled off the court in favor of Challenge’s cleaner game.
In one of the less-noticed games of the bracket, Freezer Floor Cleaner and Sundrop 67 went head to head. In the end, Freezer Floor Cleaner stayed mobile through a dynamic game, leaving Sundrops 67 on their hands and knees.
Biozyme and Tiffany Pink endured a draining game with multiple overtimes, but by the end, Biozyme simply reached deeper and pulled out the game.
Top bracket favorites Score and Solid Green 78 had a spectacular game with both absolutely dominating the floor. Unfortunately for SG78, a shiny game performance was not enough to stop Score from hitting them from multiple angles. Score won handily in the 4th and moved on to the next bracket.

Boil Out took on Cutting Board Whitener in a frightening game.

Boil Out tore deep early and fast, but they injured too many players with careless plays to keep it up until the end. Cutting Board Whitener took the win instead by filling in the gaps left in Boil Out’s defense.

Lime Remover Plus and Sundrops 75 faced off at the end of a hard work week to see who carried on the best. By halftime Sundrops couldn’t compete with Lime Remover’s fast-acting offense and were stomped out in a brutal 2nd half blowout.
In the final match of the bracket top-rated team Sentinel took on the old guard favorite Neutral Cleaner for what many expected to be the top slot. To no one’s surprise, Neutral Cleaner’s solid but simple game plan was blown out by Sentinel’s sophisticated new methods. The older team could cover the floor, but Sentinel kept everything off the board. Sentinel swept on to the next bracket.

The sweet sixteen provided a number of interesting if lopsided matches, next we saw what the heftier teams can manage.

Bio Clean and Challenge took to the floor for a nice clean game, but that turned out to be more Bio Clean’s forte.

Ironically Challenge needed a messier game to thrive and Bio Clean gave them nothing to latch on to.

The Freezer Floor Cleaner and Biozyme game wasn’t much to look at While Bacteria based cleaners work naturally, Freezer Floor Cleaner seemed to have no natural talent in this game at all. Biozyme wiped the floor with FFC and then took them down the drain for good measure. It was an absolute curb stomp in favor of the deep purple digestant and it created the eight elites from these matches.

ProfitMax Chemical Replay: Score did much the same with Cutting Board Whitener.

CBW kept the mess off the board, but they couldn’t compete on the floor and Score wore them out quickly.

Eventually, Sentinel pulled the game out with a few clean dunks, giving them a road to the Final Four.

And the Eight Elites from The Sunburst Results from March Madness… 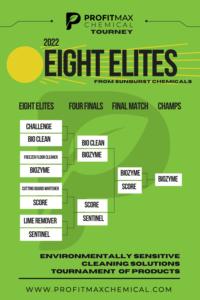 Despite the quality of the teams involved the Eight Elites went quickly thanks to the power of the winning teams. Here in the Final Four, we get to see if there are any lightweights left.

Bio Clean and Biozyme had a biohazardous game.

Both teams played dirty and the refs couldn’t keep up. In the end, Biozyme once gain proved their deeper bench and wore Bio Clean off the surface for a narrow win.

Score and Sentinel ran their game into overtime with both teams really cleaning up the offense. Do you really need to train a dishwasher or is it better to ask, do you really need to train a team on how to play when they go into overtime? Despite Sentinels’s narrow dominance on the floor Score managed to keep more balls out of their basket, leaving them with a one-point lead at the buzzer.

The Final Four proved to be everything we wanted to see with two nail-biting games.

Now in the championship, we’ll see who proves the best of all. Well, this is the ProfitMax Chemical Replay… so we kinda already know…

Biozyme and Score went at it with gusto. For once Biozyme’s deep reach didn’t win them the game outright, but Score couldn’t keep them out forever. After a sweaty game Score slipped up and let Biozyme eat away at their defense long enough to win.

And that’s it, folks. The winner of Sunburst Chemicals’ March Madness was the mighty purple drain treatment Biozyme! 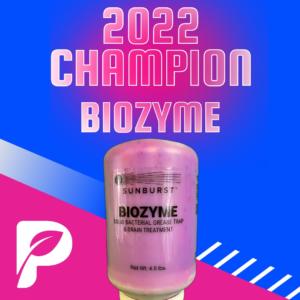 They had the power and the depth to push through even the toughest opponents and left nothing on the court by the time they were done. We hope you enjoyed the show and will see you next time, for the 2023 ProfitMax Chemical Tourney of the Elite Products of Sunburst Chemicals.

Connect with ProfitMax Chemical for any questions, options or assistance by calling us at (325) 572-4407